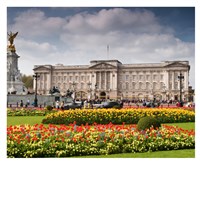 Buckingham Palace - serves as both the office and London residence of Her Majesty the Queen, and is one of the few working Royal Palaces remaining in the world today. The Royal Mews is one of the finest working stables in existence and responsible for all road travel arrangements for The Queen and her family. Clarence House is one of the last remaining aristocratic townhouses in London, and is the official residence of TRH The Prince of Wales and The Duchess of Cornwall.

Royal Gifts, the special exhibition at the Summer Opening of the Palace in 2017, will tell the story of The Queen's reign through a wide-ranging display of official gifts presented to Her Majesty during the past 65 years. With gifts representing every continent, including those from world leaders such as former US President Ronald Reagan, former South African President Nelson Mandela and President Xi Jinping of the People's Pepublic of China, the exhibition will present a spectacular display of craftsmanship from across the globe.

The Royal Mews - The tours are led by the Wardens are dressed in their striking red and navy livery and last for approximately 45 minutes. The tour introduces the work of the Royal Mews, whose staff are responsible for all road travel by The Queen and members of the Royal Family, whether by historic carriage or modern car.  You hear how the Mews serves The Queen in the performance of her official duties and prepares for major State and ceremonial occasions, from the State Opening of Parliament to royal weddings.

We travel to London making our way to the Royal Mews followed by Buckingham Palace.
We depart after our visit of the staterooms and make our way back home to your original departure point.
Details subject to alteration.