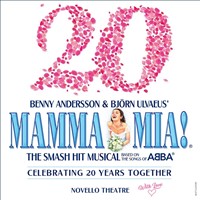 Celebrate over 20 years of MAMMA MIA! in London where it all began... Join the fun as the world’s favourite feel good musical, MAMMA MIA!, celebrates its twentieth anniversary in London’s West End. Since premiering there in 1999, the irresistible smash -hit has become a global phenomenon that’s captured the hearts of millions around the globe. The sunny, funny tale of a mother, a daughter a nd three possible dads on a Greek island idyll, all unfolding to the magic of ABBA’s timeless pop masterpieces, has now been seen live on stage by over 6 5 million people across the world, and turned into two record - breaking movies –  MAMMA MIA!The Movie and MAMMA MIA! Here We Go Again

We depart local pickups and travel to London to our hotel for a 1 night stay with full English breakfast included. Remainder of the day is at lesiure. Later, (driver to confirm exact time) our coach will drop off at a convenient point within comfortable walking distance of the theatre for the evening performance of your choice, we return transfer back to our hotel after the show. (official check in time is 16:00 so bags may be left with Concierge)

After breakfast we load may the luggage onto the coach (Or leave at concierge) with the rest of the day at leisure.This afternoon the coach will return to a pre determined point (Usually the hotel, but your driver will advise you on the day) for the return home arriving back during the early evening.
Edwards Coach Holidays terms & conditions apply

Room upgrades available on all dates. Ask your Travel Consultant for details